FAMILY BACKGROUND
Born 1950 in Chicago. Grew up in Chicago area. Graduated from Harvey, IL H.S. Both sides of family from Missouri. Mother's family were farmers. Father's family from small towns "Mayberryish". As a child, she was only one of her friends with cow/pig badges. Visited Grandparents' farm every year. They were poor, small, but sustainable farmers. Everything they ate came off the land. Feels she had a unique childhood. Most important time of childhood was the time spent on the farm. Total learning experience. Feels she would be a different person today if not for being raised as an urban person with a rural background. Grandparent's farm totaled 40 acres and included corn, alfalfa, bees, an apple orchard, raspberries. Livestock included cows, chickens, sheep, slaughtered own animals. Buildings included old barns with hay lofts.
REFLECTIONS
Farm was perfect setting if she could think about where she would want to be a child - especially one who didn't have to actually work on the farm. Games included King of the Mountain. Lots of roaming. Learned about frogs, streams. Spent time exploring. Her mother rejected the farm life. Relished urban life. Believes nobody living at that time thought they were living some ideal life, even though she thought it was so from the viewpoint of a child. Her aunt did not miss farm life after moving to town. Was dumbfounded because couldn't envision why her aunt didn't savor every moment on the farm; but as a child, she was not farming for survival, so could not understand.
COLLEGE EDUCATION
Attended college at EIU, originally in education, but did not pursue. Married after a year, returned to college at age 30. Food ways was area of interest. Earned BA in Anthropology. Eventually obtained PhD from U of I in Urban and Regional Planning, with concentration in environmental planning.
SLOW FOOD
Collects cookbooks and is now a slow food person. Currently working on getting food system planning into main stream urban planning. Goal of creating local sustainable food systems. Helped create "Slow Food Springfield". Now world wide in 132 countries with 83,000 members of "Slow Food". 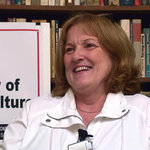