FAMILY BACKGROUND
She was born September 17, 1953 in Joliet in Will County, IL. Her Dad, Frank, a land owner, is still living on the farm in Will County. The farm has just a few acres left. Her mother, Anette, died in November, 1997. She is the only one of her 3 siblings still somewhat involved in agriculture, although 1 brother has 10 acres related to his home. Grandparents were all of German origin, but met after immigrating to the U.S. There were 3 generations living in the farmhouse. Dad's mother lived upstairs in same farmhouse occupied by the rest of the family. Mother's father also alive during Ruth's childhood. Grandparents all immigrated from Germany. Dad's parents immigrated during WWI and settled in Chicago. With depression heating up, Dad's family of 7, moved to the farm in order to feed the family. The kids were not happy about the move. When WWII arrived, her father stayed on the farm while his brothers joined the army, using the war as an excuse to get away. Thus, her father became heir to the 100 acre family farm.
LIVESTOCK
Mother did not like hogs. Milk cows were Holsteins. Chickens were white laying hens. Turkeys were raised until regulations prohibited sales to outside customers. Prior to regulations, turkeys were slaughtered, chilled in water, and sold out of the family garage. Thus, regulations changed farm operation. Inspectors were not appreciated and not a kind word at that time. They were always criticizing, but now she understands more of their function.
CHILDHOOD ACTIVITIES
Characterizes herself as a "blissfully oblivious child" (lived in the moment). Activities included playing with the calves, playing in the hay, swinging from rafters, chased by bulls, gathering eggs under warm hens. Says no place warmer or softer than under a chicken. Remembers feeling the nose of a horse for first time. Chores as a child were considered bad at the time, but now looking back, she thanks her Dad for making them do those things. Milking cows and other daily chores meant no vacations. Still today, she is not a vacation person because its not part of her culture from growing up. The dairy herd was sold in 1971. Up to that time, her Dad did what he could with his available labor, the children.
CROPS
Corn, oats, hay were raised while dairy farm was operated. Soybeans were raised later in 1960s by her brothers as a 4-H project. She tried to chew on raw soybean pod as a child. Thus she has never had a high regard for soybeans compared to beans out of the garden. Corn silage and oats were raised for food for dairy herd.
FARMING METHODS
She currently lives on 40 acres in Jefferson County. Practices rotational grazing for cattle/calf operation. 17 acres of woods are used for shelter and water by the herd. Her childhood farm life was very labor intensive. Farming today is not so labor intensive. For example, putting up hay today is much different than earlier. Farm business is also more capital intense now. There is more knowledge of nutrition for livestock now. When her father took an off farm job, it was very unusual for the time, but necessary. Mother then became the farm operator, including milking cows, raising chickens, etc. She did a lot of labor. Some stress was involved, including having an in-law living upstairs. However, she was oblivious to these stress factors as a child. Currently, she takes care of a garden and flower bed, and sometimes helps with the cattle. Although she is not gifted with livestock, her husband is talented with livestock. He knows how to take care of them. She states that raising livestock is vitally important to the well being of many farmers in the area, even elderly farmers. 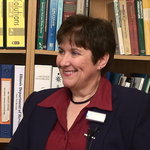